The sultan of Brunei has been on the throne for 52 years, making him the second-longest reigning monarch in the world, after Queen Elizabeth II.

In Brunei – a rather traditional, deeply Muslim Southeast Asian country – the sultan is known for leading a decadent life.

Vanity Fair once dubbed Sultan Hassanal Bolkiah and his brother, Prince Jefri Bolkiah, “constant companions in hedonism.” They spend lavishly on luxury cars, yachts and real estate, and according to the magazine, “allegedly sent emissaries to comb the globe for the sexiest women they could find in order to create a harem the likes of which the world had never known.”

He has implemented a harsh interpretation of Sharia – Islamic law – in his country, taking aim at LGBT people, women and even children with some of the world’s harshest penalties for homosexual conduct.

Under Brunei’s new laws, gay sex and adultery can result in death by stoning, and having an abortion is punishable by public flogging. Dressing in clothing associated with a different sex may incur a fine and imprisonment up to three months. Younger children can be whipped for these offenses.

Why is Brunei’s sultan suddenly so keen to enforce Sharia across this island nation of 430,000?

One of the main reasons may be plunging global oil prices. For the first time, the oil-rich nation of Brunei is grappling with economic crisis.

Other countries have similarly whipped up hatred against LGBT peopleto distract the public’s attention from economic crisis or corruption allegations.

The sultan may also be seeking to rehabilitate his reputation as a “party boy.”

“This is obviously not coming from a place of religious devotion, since the sultan himself is in violation of every single rule of Sharia you could possibly imagine,” religious scholar Reza Aslan told the New York Post in 2014, when the sultan first flagged his intention to impose strict Islamic law in Brunei.

Perhaps the Sultan thinks that implementing Sharia will enable him to leave a religious legacy that outweighs his decades of very public excess and indulgence.

As a way of trying to get the Sultan to change his mind about imposing these harsh penalties within Brunei, many celebrities and gay rights advocates are calling for boycotts of the sultan’s international hotels and of Royal Brunei Airlines. 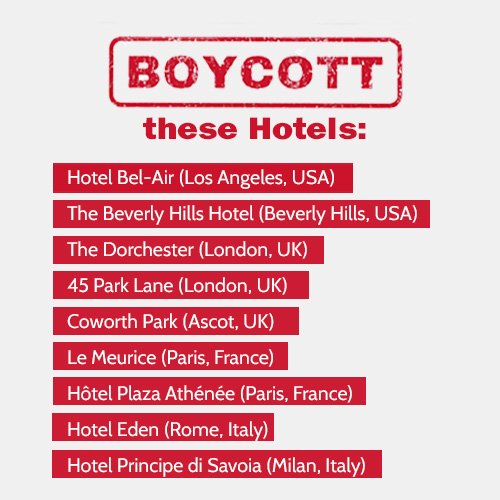 Tomorrow, the country of #Brunei will start stoning gay people to death. We need to do something now. Please boycott these hotels owned by the Sultan of Brunei. Raise your voices now. Spread the word. Rise up.

But evidence suggests that boycotts are not the most effective way to influence foreign governments.

For one, they can cause the offending government to harden its position to show it will not give in to foreign pressure. That can make it harder to work collaboratively with leaders of that country to actually improve the situation.

That’s what happened in Uganda in 2014, when President Yoweri Museveni introduced some of the word’s toughest anti-gay laws.

“I advise friends from the West not to make this an issue, because if they make it an issue the more they will lose,” he said. “Outsiders cannot dictate to us. This is our country.”

This risk is compounded by the evident double standard of an international boycott of Brunei and the sultan’s businesses. Other countries that impose the death penalty for same-sex sexual conduct – including Afghanistan, Yemen, Pakistan, Iran and Saudi Arabia – are not subjected to similar global condemnation.

Who can stop the sultan?

The United Nations may stand a better chance of curbing Brunei’s behavior.

Brunei’s human rights record will be reviewed by the U.N.‘s Human Rights Council next month, as part of a regular assessment called the Universal Periodic Review – a relatively new process described by the International Bar Association as “the most progressive arena for the protection of the LGBTI community internationally.”

Though the Universal Periodic Review has no power to enforce its recommendations, it has shown some success in advancing human rights in U.N. member countries. Its method is to foster dialogue with and between governments and civil society, create a plan for improving rights and closely monitoring progress.

Brunei’s allies and neighbors are also well placed to put pressure on the sultan.

Research has found that if a state is criticized by one of its strategic partners, it is more likely to accept that criticism than if it comes from a state with which it has fewer ties.

If negotiations with Brunei are unsuccessful, the Commonwealth of Nations can take the powerful step of suspending its membership. That would prevent Brunei from participating in group meetings and events – including the popular Commonwealth Games, which have been described as “sport with a social conscience.”

This step was previously taken in response to grave human rights violations committed by Fiji, Nigeria, Pakistan and Zimbabwe.

Over 100 LGBTQ and human rights groups from Southeast Asia have also called on the Association of South East Asian Nations – ASEAN, a regional intergovernmental organization – to take a hard line against member state Brunei, saying its new laws “legitimize violence.”

But ASEAN’s non-binding 2012 declaration of human rights – which does not explicitly prohibit discrimination on the basis of sexual orientation and gender identity and contains imprecise language that significantly dilutes its power – seems unlikely to demand an institutional response.

Does the sultan mean it?

There is concern that Brunei’s imposition of hard-line Sharia will embolden its Muslim majority neighbors, Malaysia and Indonesia, to follow suit.

Malaysia already applies Islamic law in some states. Last September, two women found guilty of attempting to have sex were sentenced to be, and were, caned.

In nearby Indonesia, gay sex is legal in all but one province, but homophobia and transphobia are rising nationwide, and recent talk of criminalizing gay sex has LGBTQ Indonesians worried.

Brunei, it’s important to note, has not actually used the death penalty since 1957.

An optimist could conclude that the new laws are mostly symbolic – designed to beef up the sultan’s Islamic credentials and garner favor with other Muslim countries to boost trade and tourism.

That interpretation, however, is unlikely to diminish the fear of the vulnerable minorities targeted by Brunei’s Sharia laws.

Paula Gerber, Professor in the Faculty of Law at Monash University

This article is republished from The Conversation. Read the original article.

The Alleged “Risks” of Trans Women

The “unique risks” these prisoners posed is unclear although it is perhaps worth noting that none were involved in the crime that triggered the decision, which took place in a different prison. That being said, the decision to relocate them was reportedly based ‘on a range of robust assessments, including the potential risk of harm to other women, by a transgender case board’.

However, the success of this unit will ultimately be decided entirely by ‘how effectively the prison protected its biologically female inmates’. In this way, the rights and wellbeing of these preemptively segregated transgender women seem to be largely inconsequential.

While there should absolutely have been a response to the sexual assaults that triggered the transgender unit, the response should probably have focused more on the assaults and the circumstances that allowed it to happen than the gender identity of the perpetrator. Especially since rape culture in both men and women’s prisons have been rampant, under-researched and largely left unchecked for years.

Therefore, the concern is that this unit and process of segregation is more a manifestation of the harmful narrative that transgender women are inherently dangerous to other women than a legitimate safety measure.

Policies like these risk setting back the push for integrating transgender women into women’s prisons around the world and in Australia — a move that beyond meeting basic human rights obligations could actually make the difference between life or death.

In the UK, a transgender woman killed herself in a male prison in 2016 ‘following complaints of bullying by prison staff’, in 2015 two transgender inmates also ‘died of apparent suicide in a male prison’ and in the last two years ‘[n]early a fifth of women who died in prison … were transgender’.

As for Australia, a transgender woman in a male prison described her life as “hell on earth” with repeated sexual assaults and deprivation from necessary hormone therapies. The reality is that transgender women are actually more likely than most to be victims of sexual assault in the prison system with transgender women reporting ‘daily experiences of sexual coercion and psychological distress’. Other reported abuse include medical treatment by staff without the necessary medical expertise, ‘strip searches and urinalysis procedures in front of other inmates, or by officers of the birth sex of the inmate’ and ‘verbal harassment by staff’.

Australia’s Laws on the Issue

NSW is seen to have the most progressive policies, where staff are ‘required to address and manage trans people in accordance with their self-identified gender, and self-identification is the only criterion for identification as transgender’. However, hormone therapy is limited by whether the individual began therapy before incarceration. In Queensland, transgender women are usually placed in men’s prisons and like in NSW ‘are unable to access hormone [therapy] and start transition unless they had begun’ it before incarceration. Transgender women also tend to be placed in men’s prisons in Western Australia where their policies are worryingly underdeveloped.

Just last month, a transgender woman in Perth spent ‘over 300 days in custody in a male prison’ prior to her sentencing where she was ‘kept in solitary confinement, denied access to hormone replacement therapy (HRT), not provided with appropriate clothing, and searched by male guards’ and upon ‘return to a male prison, she will continue to be kept isolated in crisis care – something that could have extreme psychological consequences’.

Ultimately, the prison system is ripe for reform across a range of feminist issues, particularly for transgender women. However, as new policies on the issue are explored and introduced, I will be looking out for what I consider to be the real risk that might arise — the introduction of policies that risk blurring ‘the line between prisoner safety and transphobic discrimination’.

Amanda Selvarajah, Student in the Faculty of Law at Monash University